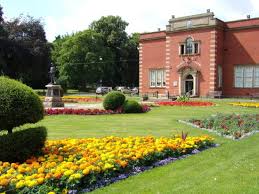 Within the park is a memorial to soldiers killed in the Boer War (1899-1902) which consists of a bronze statue of a soldier on a granite plinth. This was first created in 1905, and was originally located in Bond Gate in the town centre, but was moved to the park in 1967. In 2006 the original statue was stolen, and it was replaced by an identical one in 2008. The memorial is grade II listed.

South of this there is also a war memorial which was first erected in 1920 to commemorate soldiers who were lost in the First World War, with a later dedication to those lost in the Second World War. The memorial consists of a granite Celtic Cross, which is also grade II listed.