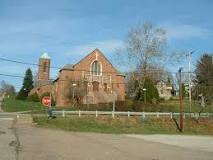 Allison Park has a play area, with equipment for different age groups, and a football area. The pavilion is now used to house a children’s nursery and is well sited for them to use all the facilities in the park. The park was named in honour of William Allison, a local farmer at Newmains and Almondhill. The park also neighbours Pikes Pool,which was used from the 19th century until recently for the distllery industry. The workings of the old mill lade still remain.