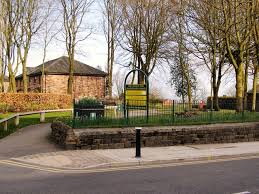 The library / town hall that is located within the boundary of the park originally was Tottington Hall, home of the Nuttall Family - which was the oldest family in Tottington. It is believed that the grounds of the park itself were originally owned by the Nuttall's. In the 17th Century considerable restorations and alterations to the building took place. Tottington Urban District Council purchased the hall and estate from Hugh Porritt Roberts in February 1918 for £2750.