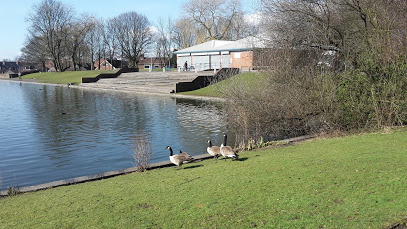 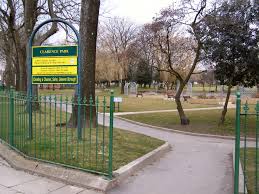 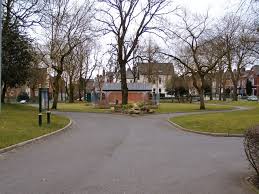 The park
Clarence Park was one of four parks established following a public meeting in 1883, with contributions from Lord Derby, the Lord of the Manor, a public subscription, and, in this particular case, generous contributions of land and money from a local benefactor, Mr Thomas O Openshaw. This and another three parks were opened by the Prince of Wales/Duke of Clarence, HRH Prince Albert Victor, on 21 July 1888. The park was previously known as 'Walmersley Road Recreation Ground'.

The Bandstand in Clarence Park was first opened on 4 November 1899 and was presented by JP Henry Whitehead and businessman Edmund Milnes who owned the sheet factory in Chesham. A bronze plaque was found in 1985 by Mr and Mrs Appleby who had lived in the Park House. It was presented to Marisa Dale who said she will display it on the new bandstand on completion.

The lido
Clarence Park Lido started life as a reservoir according to the Bury Times (1 June 1963). Work had started in 1962 when 10,000 gallons of water were drained from the then reservoir and concrete walls replaced the boulder strewn banking. Corporation gardeners had to battle bad weather to try and get the lido ready for the summer of 1963. By the Summer of 1964 the Lido was in full swing. These works cost an estimated £14,000. The Lido was described as probably being the "finest in the North". Councillor J. Roberts chairman of Bury's Recreation Grounds Committee, said "There won't be a lido to touch it anywhere in the North when all of the work is completed. It has been tailor-made for the site, and a lot of work has gone into the scheme. It could put Bury on the map as a centre for trippers".

Clarence lido was opened officially by the then Mayor Councillor J. Roberts on Saturday 13 May 1967, along with the Mayoress Mrs A. Roberts.

Boats were purchased (10 for £700) for the lido which started approx. in April, built by Rathbone Bros of Streford and had a boost by the weather this day; the sunny weather saw queues to have a go of the boats. They had made back £150 within the first month.

Planning bosses approved the ambitious plans of the Charity Age Concern to transform a disused pavilion at Clarence lido into a multi-activity centre for the over 50's and was renamed the Jubilee Centre. It was decided that the old pavilion would be best demolished and to start afresh with a totally new building (Bury Times 23 September 1994), the cost of the scheme has now risen to £130,000 which Age Concern are raising along with donations from other charities.

Miss Walkers Field
Unfortunately there is little history on this particular part of the park. All is known is that the field was left to the people of Walmersley for recreation purposes by a Miss Walker.

- cycling - Angling on the lido

- Model boats on the lido - Bandstand