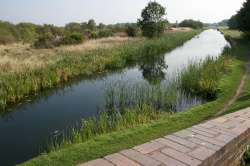 a vital wildlife link to the wider countryside

Because it is a place of vital connectivity for wildlife, it is often the residents of Goscote who experience close encounters with our most elusive and secretive wild creatures.
In the summer of 2011, Walsall Countryside Services received several reports of deer throughout Goscote Valley.  It is believed that these were two male red deer, who it is believed had made their wayfrom Cannock Chase to Walsall through this wildlife network, often called a 'Green Corridor' by wildlife experts.  Some weeks later, the deer were reported again - this time in Sandwell Valley!  This is clear evidence of animals using Goscote Valley to move from Cannock Chase down into Sandwell Valley, and possibly even further afield.

0It is not just mammals like deer, foxes and bats that use green corridors - birds, amphibians and reptiles all rely on green corridors too.  In particular, insects rely on these networks to move about.  Its not just about safety, and finding food - many of these animals use networks like Goscote Valley to find a mate.  Without green corridors, animal populations can become isolated, and genetically poor, which can affect their health.
It is often an industrial past which has led to some of today's best green corridors - Canals and old Railway Lines become wildlife highways when they cease to be used for industry!

Goscote valley contains within it several smaller sites, including Mill Lane Local Nature Reserve and Heath End.
Heath End
Heath End is an urban nature reserve.  The 12 hectare site is a fantastic mosaic of different habitats, including blocks of woodland, scrub, grassland, wetland and open water.  Because it is adjacent to the Wyrley and Essington canal, it is a wildlife corridor for water fowl, and is a rich habitat in which amphibians flourish.  The site is best accessed off Slackey Lane or Brewer's Drive.
Mill Lane
Another fantastic site in Goscote Valley is Mill Lane Local Nature Reserve.