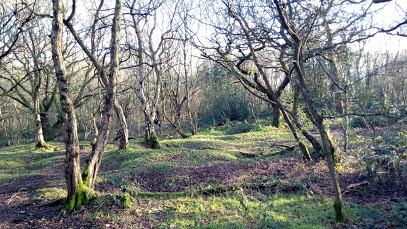 One of Walsall's district parks

Rough Wood Chase is made up of six separate nature reserves, which lie on the western edge of Walsall Borough.  It comprises Rough Wood (the largest oak woodland in Walsall), Bentley Haye, Wood Farm, the Piggeries, Sneyd Reservoir and Oily Goughs. Rough Wood Chase also includes Beechdale Park, despite it not being a formally designated Local Nature Reserve, and the site is also adjacent to a popular fishing site, Bailey's Pool.
Rough Wood
Rough wood is made up of a series of pools in the middle of the oldest and largest woodland in Walsall (Rough wood represents about 10% of the oak woodland within the West Midlands).  Its a great place to go for a wander to lose yourself in nature for a while - the old oaks and lovely sunny clearings are full of wildlife, from nesting woodland birds, as well as toads, frogs, two species of newt, and lots of woodland insects.  The site is separated from Bentley Haye (to the south) by the Wyrley and Essington Canal.  Here at Countryside Services we work with British Waterways to survey the aquatic plants in the canal each summer.

Bentley Haye
Bentley Haye is a large area of wet grassland that was originally planned to be a golf course (it even has the two 'balancing ponds' remaining!).  These days Bentley Haye is a haven for amphibians and aquatic insects like caddis flies and water beetles.  In the spring of 2011, Great Crested Newts were recorded on the reserve for the first time. (Its likely that they have made their way there from Rough Wood, which has had a small population of the amphibians for at least 20 years.  We're very excited to find out about them, and we will be working to improve and protect the site for amphibians.

Oily Goughs
Oily goughs is a site that we have done lots of work on recently.  After a series of amphibian surveys (to make sure there were no protected species on site), we have reprofiled the pond at the southern end of the site.  It had been very overgrown with reeds, and was almost completely dried up this year.  After relocating some fish and other animals, we scraped a new profile for the pond, which should refill over the winter and look fabulous by summer 2012!  There are two other pools ate Oily Goughs (which was named after a man named Gough who used to sell scrap oil on the site many years ago!).

The other pools are used for fishing  on a regular basis.  We even relocated two large tench into the big pool during the pond works.  We're really happy with the quality of the water on site, and we know that its great, because we have some really special aquatic species, including nostoc (known to our volunteers as 'green jelly blobs', and the rare Water Stick Insect!

Wood Farm
As its name suggests, Wood Farm used to be a farm, lost with the building of the M6.  During the motorway's construction, the area was used as a storage yard for materials.  Within the stone that was stored there was an abundant source of wildflower seed.  Thanks to this imported seed, Wood Farm has a vast array of wildflowers, and is one of Walsall's little-known gems!

The Piggeries
The Piggeries is the smallest site of Rough Wood Chase, and links Rough Wood to Wood Farm.  It was once part of a farm which was built up to make way for the M6.
Beechdale Park
Beechdale Park is located opposite Rough and Bentley Haye, on the other side of the M6 and the canal. It's linked to Oily Goughs and Bentley Haye, and is on the mid-point between the two along the canal. The park is also accessible via Bloxwich Lane by foot.
Sneyd Reservoir
Sneyd Reservoir is the largest body of open water within Rough Wood Chase.  Originally the water level would hav ebeen a lot higher than it is now.  it was built to maintain the water levels in the area's canals, before Chasewater reservoir was built.  Over time, trees have colonised the old reservoir and dam bed.  Its a great place to see waterfowl.

The History of Rough Wood Chase
The wood is now owned by Walsall Council, but it was privately owned until the 1950s. It became Walsall's first Local Nature Reserve in 1989 to ensure its protection and enjoyment for future generations.
The first recorded mention of Rough Wood Chase Local Nature Reserve is in the 12 th century when it was part of the Bentley Hay district of the Cannock Forest. This royal hunting forest stretched over an enormous area of countryside, covering much of what is know Walsall, Sutton Park and Cannock Chase. The forest provided a ready source of food of food for the local peasants with wild deer and game being plentiful. Unfortunately, legend states that the monarchs and forest keepers disapproved of this. A decree was, therefore, sent out that either the poaching had to stop or the wood was to be felled. Presumably, the poaching did not stop as the wood was indeed felled during the 16 th Century on the orders of the King.