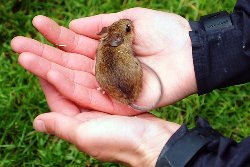 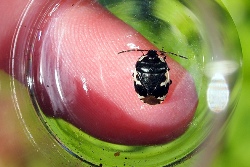 will include many of the borough's nature reserves

Walsall's brand new country park links together many of its nature reserves
Exciting things are happening in Walsall's countryside.  Walsall Countryside Services are currently working towards the designation of a brand new country park, which including its newest:  The Grange.  The former golf course will form the 'gateway' to Walsall's countryside, allowing people to walk from the Arboretum right into the heart of our green spaces, connect to the canal network and long distance footpaths including the Beacon Way.  Lots of work is going into improving the value of the Grange as wildlife habitat.

BioBlitz
In 2012, Countryside Services worked with the Black Country and Staffordshire Naturalists, the Wildlife Trust and the RSPB to hold two BioBlitz events, where members of the public were invited to spend a day 'in the field' with wildlife scientists, learning to identify and record wildlife.  In spite of poor weather, the events were incredibly successful.  Together with surveys of beetles and plants, the species lists for the sites are an astounding 66 species of insects & minibeasts, 3 species of mammals, 34 birds and 94 species of plants and trees - just in the Grange area alone!

The Habitats
There are lots of different types of habtat at the Grange.  The babbling brook which runs from Cuckoo's Nook, through Hayhead Wood, under the Daw End Branch canal and through the Grange and Arboretum.  This brook has records of Water Vole - a species we are keeping an eye out for and will be actively encouraging!  There are areas of wildflowers where leaf-cutter bees forage for pollen, and wooded areas with rich invertebrate life on the ground.  The trees also provide home to many species of birds, including buzzards!  At certain times of the year, the grassy areas of old ridge-and-furrow fields gives the meadows a striped appearance as different species of grasses prefer the ridges to those in the furrows!
Tree Planting
As part of the habitat management at the Grange, an incredible 10,000 tree saplings have been planted.  This work was funded through the English Woodland Grant Scheme, and has included native species like Oak, Birch and Black Poplar.  The areas for planting were chosen after a long process of surveying plant species and archaological features.  Many areas have bee left for their heritage value (areas of ridge and furrow fields) or for their wildlife falue (floristically diverse areas full of wildflowers), so these were avoided when selecting tree planting area.  It does seem like a lot of trees to plant, but over time, it is expected that not all trees will survive to maturity, and the area will eventually go through a process of thinning out in order to favour the stronger trees.

Access & Interpretation
The improvements to the site and to the country park in general will not just include planting trees or managing meadows - we plan to improve paths and access, install interpretation panels and signage to improve the value of the site as an educational resource for local schools, community groups and visitors in general.  There will also be more public countryside events including minibeasting, forest school activities, and the opportunity to get involved with managment of the reserve and the wider Country Park.