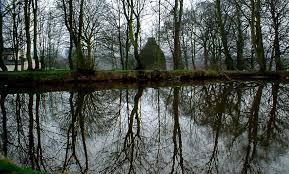 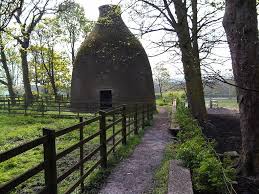 in the same year as the Battle of Waterloo. It is one of the few surviving parts of the Swinton, later, known as Rockingham Pottery, that occupied the site.

Other traces that can be seen include the pottery ponds, along with parts of the gatehouse and painting rooms, which are now private houses. At its height, 270 workers were employed here. The site included other kilns, a flint mill, china warehouses and cottages.

The pottery was founded in 1745 and remained in production until 1842, under the patronage of the Wentworth Estate.

There are still traces of the pottery ponds along with parts of the gatehouse and painting rooms but the gatehouse and painting rooms are now private houses but you can still visit the kiln and pottery ponds. When Rockingham Pottery closed in the 1840's the kiln became a residence and a door and windows were installed and at about the 1900's it was then used as a smallpox isolation hospital. Rockingham Pottery made the Rhinoceros Vase (which now stands on display at Clifton Park Museum) a very impressive piece made in 1826, standing at over a meter tall it was claimed back then to have been the largest piece of porcelain ever to have been fired in one piece in England.