The Umm Al Emarat Park, an icon of contemporary design in the gardens, is one of the hallmarks of Abu Dhabi City and is associated with the emotional memory of its residents. It has been successful in launching its second season in its remarkable form and aesthetic and service landscape. The park, which is built on an area of ​​14 hectares and a half and extends 690 meters and 205 meters wide, has become a landmark in the field of entertainment and education. It attracts many activities that promote a healthy lifestyle for adults and young people. From scientific, educational and awareness festivals as well. The park receives visitors this season with a long list of favorite entertainment and entertainment, such as the Garden of the Wise, the Shadow Garden, the Open Theater, the Cinema, and so on. Each of these events is unique in its form and the addition of its visitors, Young people find it fascinating to paint, paint and explore the world of rare animals and plants, as well as vast areas for parents to break weekly routines.

Icon of Abu Dhabi "This achievement is a community, cultural and leisure center with an attractive environment to relax, explore, enjoy and entertain in a natural environment with trees, streams, fountains, modern lighting, running and cycling places," said Abdul Salam, General Manager of Umm Al Emarat Park. , Between large grassy areas, along with palm trees along the waterway, which are interspersed with flowing tables, from various regions of the Emirates as well as some Gulf countries to form this beautiful symmetry, similar in shape, age and breadth Za. "The biggest challenge facing them is to maintain a high level of services, cleanliness and facilities," said an expert. "This icon, which is unique in its spaciousness and combines water, greenery and expansive space, seeks to achieve more successes during its new season by adding activities and programs. Educational, recreational and sports activities that aim to achieve a new concept of hiking that combines knowledge, movement and physical activity, making it a five-star space.

Extension of working hours "The park is a major landmark in the region as a whole," he said. "The park has resorted to extending the working hours under the urgency of the public from all over the UAE and the Gulf countries, "The park is open to the public daily from 8:00 am to midnight. The zoo, one of the park's most popular facilities, welcomes visitors from 9:00 am to 9:00 pm, while That interactive fountain in the children's garden, operated from 10:00 am to 10:00 pm. "

Quality facilities The quality standards are high throughout the year. "We strive to establish these standards in terms of cleanness of facilities, preservation of vegetables and plant nutrition, because the work extends during the summer and is intensive during the evening after the park's working hours, so that technicians, specialists, engineers and workers 200 employees and employees to oversee the facilities of the park, as well as the administrative staff, and this large number of employees works in a single spirit to ensure the success of maintaining the radiation achieved by the Garden of Umm Al-emirates by everyone's testimony, and continuity of service Their standard high. »

New restaurants An expert stressed the importance of maintaining the cleanliness of the park, stressing the need for public cooperation, adding that the administration will not allow the entry of fatty foods and meals with the possibility of taking sandwiches, tea, coffee and snacks such as falafers, biscuits and other children's light foods, stressing that the park «Umm Emirates» will witness The opening of a number of restaurants and cafés during the new season, to reach 9 restaurants, which has many Emirati youth, which will spread in different places of the garden, and offers a variety of dining options, and the park launched a loyalty card visitors, T free when charging AED 100 also allows them the card to choose the annual membership of the park, providing a number of times the entry is limited at a competitive price with the possibility of pre-shipping fee to enter the park, which is automatically deducted, relieving pressure on the box office days rush, festivals and events.

Education and Leisure Due to the great popularity achieved by the festivals and scientific events at Umm Al Emarat Park, the events of the previous season, including the RAK Market, which started on 8 October, will return to the park this season. "Abu Dhabi Science Festival "In November, the" Get Fit for Drivers "campaign coincided with the Formula 1 season in October and November, and the Food Lovers Festival in February 2017. The park also launched a package of programs, , So that students will recognize The number of plants and animals living in the region, especially in the UAE environment. We have received the number of school students and reached 10,000. We expect the number to increase this year. To benefit from these recreational and educational trips, we have more than 10 cadres to give the scientific lessons in line with the curricula. Schools try to connect the park to the curriculum, as we will work to integrate some 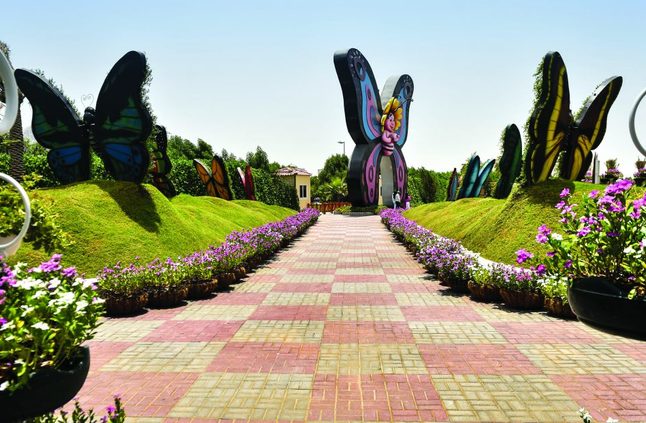 The Butterfly Garden in Dubai is a new aesthetic iconic, more imaginative with its colorful colors and the charm of...