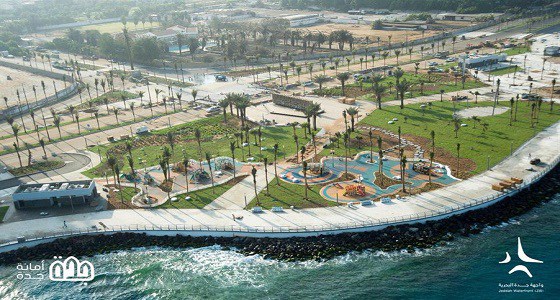 His Royal Highness Prince Khalid Al-Faisal, Advisor to the Custodian of the Two Holy Mosques, Prince of Makkah Region, today inaugurated the largest cultural park in Nawras Square, the largest of Jeddah's 42,000 m2 new Jeddah frontiers. How do we set an example? ", While he launched a competition in the design, programming and control of the robot, a corner of talent and creativity and invention for students, and the initiative of electronic applications.

His Highness the Amir of the Makkah Region thanked the Custodian of the Two Holy Mosques King Salman and his faithful Crown Prince, may God protect them, for this interest in Jeddah and the logic of Mecca. Prince Khalid Al-Faisal said: "Praise be to Allah that the effort by the state and the care of the king, I see now fruit," and added: "I will shorten my feelings in one sentence, I was repeating and say the highest head you are Saudi ..

Today, I say Ra'at al-Ras al-Yasudi. "The pavilion of the Mecca Cultural Forum, in the cultural garden, presented the contents of the forum to the public. It also began to present cultural competitions within the forum's pavilion to the public. The cultural figures were also featured in the pavilion during the cultural park, 10 days, while the pavilion of the Mecca Cultural Forum dedicated an interactive interactive screen in the form of values ​​that aims to build values ​​in the characters of children towards the role model, alongside the launch of the parietal activity, which will include comments on a particular issue posed by the participation of visitors to the pavilion.

Of the work of the winners of the electronic application contest. The initiatives also included "Child Fingerprint", during which the Ministry of Education creates an educational, educational, recreational, organized, encouraging and supportive environment for children's learning and developing their creative and creative skills. , Karkan scientific discoveries, children's creative library, games and electronic applications enhanced child education.

The activities of the Cultural Park include a number of activities related to art. The Ministry of Education offers an educational and entertainment program that includes many activities such as free drawing, wood burning and water painting, while King Abdulaziz University provided interactive activities for visitors and those interested in libraries and reading. Some of the manuscripts and cultural books, participation in the recording of audio books, the introduction of a book program, teaching children how to make the book, as part of their participation in cultural park initiatives. King Abdul Aziz University presented a traveling exhibition that presents a series of awareness messages to the community, how to deal with people with disabilities, as well as some technological devices that help persons with disabilities to live. The Directorate of Health Affairs in cooperation with hospitals, Which are of interest to the individual and society, such as awareness of the importance of sport and its impact on public health, diabetes awareness, the effects of smoking health, and other educational and recreational topics to support public health and enhance their concepts, Maritime Safety and First Aid with full explanation of port.

In addition to the initiatives, the General Organization for Technical and Vocational Training provided an entertainment festival with artistic, professional and artistic aspects in various fields such as: screen printing, digital photography, hairdressing, women's decoration, web design, cooking and sewing. The cultural park will last for 10 days during the mid-year vacation and will offer 10 cultural events to the residents and visitors of Jeddah, including: electronic applications, interactive education, scientific innovations, skill festival, al-Kidwa workshop, The aim of these events is to create an interactive cultural and knowledge environment for all segments of society and to promote the model of role models.